There’s a lovely little spot downtown that I quite enjoy walking past as I head into work. It’s an office in an old converted Victorian house, and they’ve planted the yard full of flowers, herbs, and even a lovely fruit tree. Once August began, I noticed that the sidewalk in front of their yard always…

There’s a lovely little spot downtown that I quite enjoy walking past as I head into work. It’s an office in an old converted Victorian house, and they’ve planted the yard full of flowers, herbs, and even a lovely fruit tree. Once August began, I noticed that the sidewalk in front of their yard always seemed to be full of squished fruit, leaving big purple stains. A few of the fruits had made it to the curb unscathed and so I gathered them up for further study. 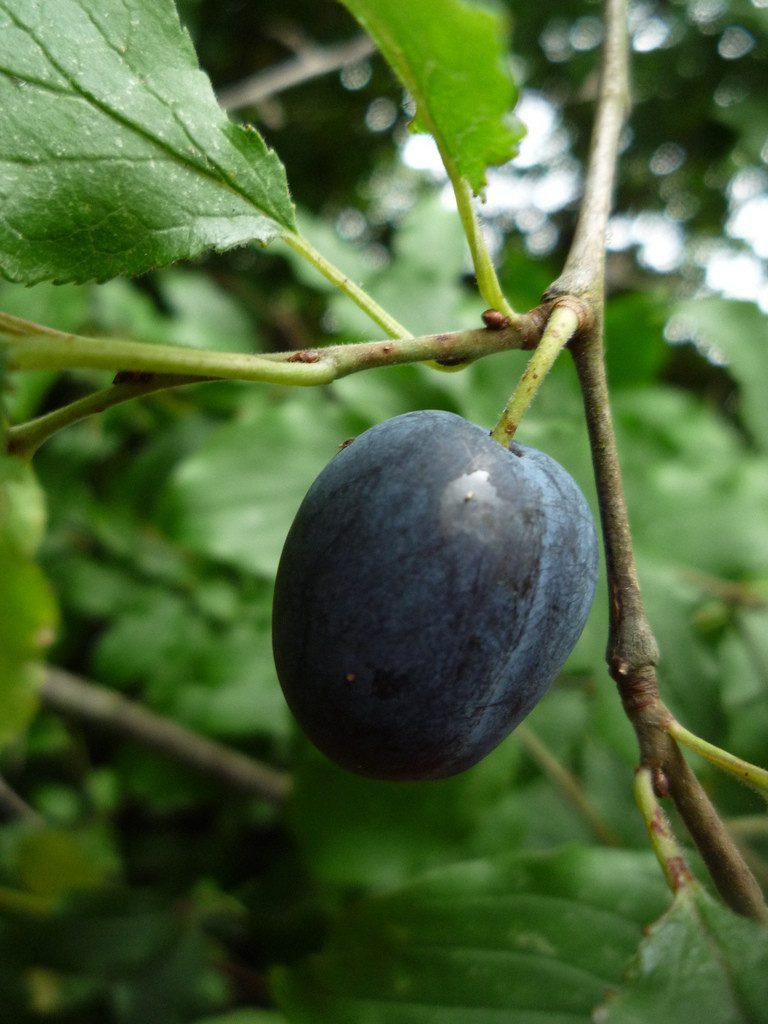 Damson Plum on the tree (image credit Beka on Flickr)

The fruit looked like giant grapes: dark purple with a white bloom on the thick skin. I cut one open and poked around at it. It was indeed similar to a grape, but instead of seeds, it had a stone. A plum! Knowing there are some plums that aren’t edible (or are edible but will upset your stomach), I compared it to pictures online until I was confident that it was indeed safe to eat. Once I had reasonable certainty that I was indeed holding Damson Plum, I gave it a taste. Not bad! It was very tart and a bit dry, but I saw how tasty it would be with a bit more sweetness.

The next day, I stopped into the lovely office and chatted with the folks inside. It seems that their boss does in fact harvest and use the plums, but as there were so many fruits, I was welcome to grab a handful or two each time I passed. With their blessing, I’ve been gleaning from the lovely tree for a few weeks now and depositing the whole fruits into a bag in my freezer, waiting to have enough to do something with. But what?

Sure enough, I recalled that bag o’plums when the cooking and canning bug bit me with a fierceness the other day. A quick kitchen inventory revealed that I had *nearly* enough plums to make a jar or two of something tasty…but not quite.

Digging deeper into my freezer awarded me a pint of frozen muscadine grapes. Perfect! The sour skin and sweet flesh of the locally grown grapes would complement the tangy, sour plums as I cooked them down into deliciousness. (thank you Mother Earth Produce!)

The hard-frozen plums and muscadines were put into a pot with about a 1/2 cup of water and set to a medium low heat. They warmed, simmered and bubbled until I could mash them.

Incidentally, do not mash with too much enthusiasm, else the now-hot plums may pop and spritz you with steaming plum juice. Which hurts. And also leaves stains. Ahem.

Once the fruit was nice and squishy, I turned off the heat and let it cool until it could handled with bare hands. Time to deal with the grape seeds, plum stones, and the thick skins of both. All of the heavy skins were put into a bowl on their own, and another bowl caught the grape seeds and plum stones so that I can save them and plant them later.

Some of you folk are smart and have something neat like a food mill, but not me. Improvisation with a colander and a spatula and my bare hands worked quite well, even if I looked like a murderer by the end of it all.

The grape and plum skins were pureed in my NutriBullet. The thick, pectin-rich purple paste was added back to the pot full of strained pulp and juice, and the heat returned to medium. After a quick taste, I chose to add a quarter-cup of sugar, but I probably won’t next time. I underestimated the rich sweetness that comes from the fruit itself as it cooks down.

A few sprinkles of powdered ginger was added after another taste test. While I haven’t yet tried it, I would imagine that cardamom would be another good choice for a future batch or black pepper for a savory twist.

Once it simmered for a minute or two, I turned the heat back to low and let it be for most of the day. I’d check it and give it a stir every half-hour or so as it cooked down and turned from a brilliant scarlet to a dark and lush crimson. Once it was half the original amount, I turned off the heat and prepared to store the butter.

I sanitized two jelly jars and a one-ounce jar and their lids, more than I thought I could fill. I like to have an extra jar on hand just in case.

The hot plum butter filled one jelly jar and the small sample jar perfectly. I did not preserve them with water bath canning or pressure canning, so they were stored in the fridge to be used within a few months. I don’t foresee that being a problem!  The intense flavor of the damson plums and muscadine grapes have won over everyone who’s tried it. 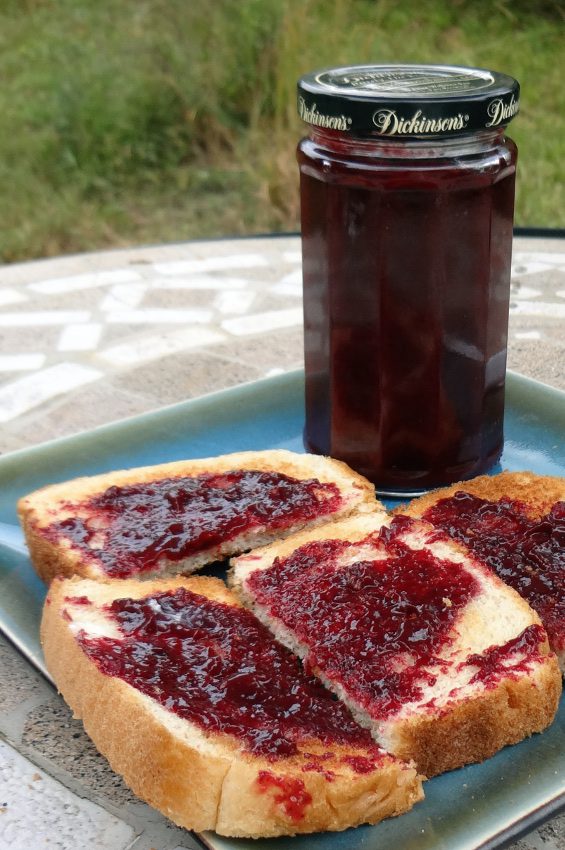 The wee jam jar was delivered with a note of thanks to the office that allowed me to glean the plums, as both a gesture of gratitude as well as the hope of future harvests. What joy is there in making delicious things if not to share them?

Delicious Things to Do With Damson Plums & Other Resources

Grow Forage Cook Ferment: “What is Gleaning (And How To Do It)”

Homestead Lady: “How to Make Your Own Prunes”

Image of plums on the tree from Flickr, image credit Beck