Four Thieves Vinegar is a great tool that gets a lot of use around my house. A dear friend introduced it to me by trading with a 4-ounce jar at an herb exchange. She explained that this herb-infused vinegar has antibacterial and antiviral properties.

I use it as a spray for sick rooms to stem the spread of illness, spray it on mattresses while the sheets are off for a wash and change, and I even clean counters with it.  Don’t worry about the vinegar smell, either. As long as you spray it judiciously and don’t soak absorbent surfaces with it, it will evaporate without leaving an odor.  Personally, I prefer the smell of herby vinegar over most perfumed chemical sprays.

Herbal vinegars have been used for centuries for health and wellness.  I’ve used it for washing my hair, for foot soaks to help combat fungal overgrowth, and of course, my beloved fire cider for those cold winter nights. 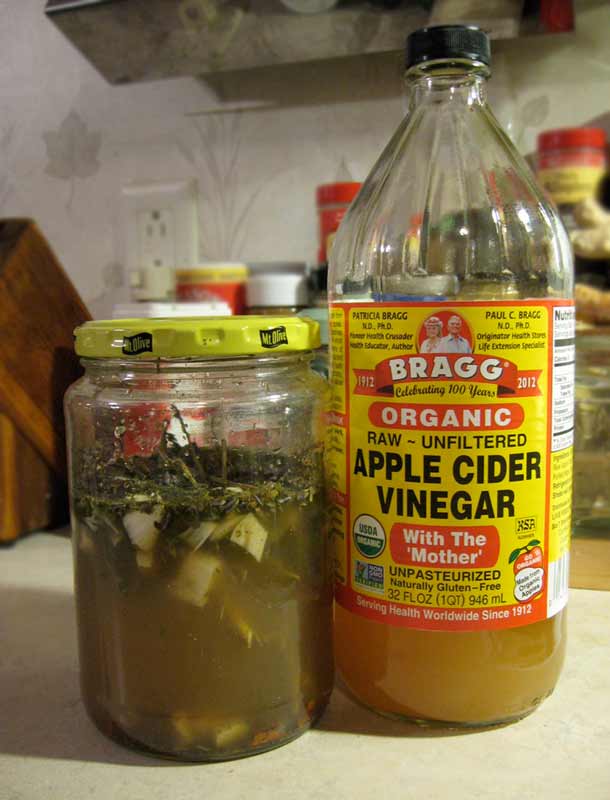 This will be ready for use in one month.

But why four thieves?

The legend goes that there was a pack of thieves somewhere in plague-ridden Europe who made their bank by breaking into the houses of the dead plague victim’s houses and stealing their valuables, and they did it for a good long while. They weren’t pursued with any speed because it was assumed that they’d simply contract the plague and die. The thieves were finally caught with vinegar-soaked rags tied over their noses and mouths. When asked how they had gotten away with such a dangerous job for so long without catching ill themselves, they offered to exchange their recipe for leniency, indicating that the special vinegar was the key to their continued health. They washed their hands and faces with it and liberally used it on their bodies before they went a-robbing. There are other tales out there, some of them claim this all happened in the 14th century, others claiming 18th, some say France, others elsewhere…and there are as many variations in the recipe as there are in stories about its origin.

Some people use only four herbs, one for each thief.  But as my main focus is antiviral and antibacterial purposes and a general “get-ye-gone!” sort of energy, I go with more than four.

**This Four Thieves Vinegar recipe is not intended for internal use – I make plenty of other tasty vinegars and tinctures for those purposes.  This is for heavy duty cleansing of both physical and energetic planes.**

A trusted source for herbs!

Add the following herbs in a jar:

For best results, start this blend as the full moon wanes – a prime time for banishing, cleansing, and removal of barriers.

Put all of the herbs in a jar – as this is not to be taken internally, use the quantities that feel right to you.

Cover the herbs with Apple Cider Vinegar (the one with the mother is best, raw and unprocessed).

Put a lid on the jar and set it on a countertop out of direct sunlight for at least a moon cycle, but no more than two months. Be warned that the vinegar will eat away at metal lids, like the ones on pickle jars and the like.

Strain your vinegar it into a jar or bottle.  You can throw those herbs in your compost bin or sprinkle them at your boundaries where you need a bit of reinforcement!

Once strained, store your vinegar in a dark, cool place.  The refrigerator should do fine, although I just keep mine in a plastic spray bottle under the kitchen sink with the cleaning supplies!

Remember, if it is going on your skin, dilute it first. 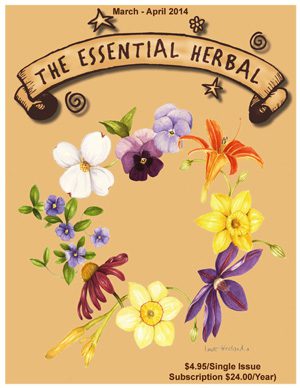 This article appeared in the March/April 2014
issue of The Essential Herbal!

What do you do with too much mint?