I live in an incredibly beautiful and bountiful area.  Western North Carolina has so much to offer in the way of local, healthy food that I’m becoming quite happily spoiled by my diet.  There are hop farms for brewers, local bison ranches, and in Hendersonville, North Carolina, you can’t throw a stone without hitting an…

I live in an incredibly beautiful and bountiful area.  Western North Carolina has so much to offer in the way of local, healthy food that I’m becoming quite happily spoiled by my diet.  There are hop farms for brewers, local bison ranches, and in Hendersonville, North Carolina, you can’t throw a stone without hitting an apple tree.  The roads around Lake Lure and Chimney Rock wind through a verdant place where orchards and small farms thrive.

My love and I recently went winding down that road with our housemates, a friend, and his six-year-old daughter to pick apples from J. H. Stepp Orchards, a beautiful old orchard we picked from last year.  We missed the really sweet apples of late August and September but still delighted in the bushel of Golden Delicious, Fuji and Rose Cameo Fuji apples that came home with us. 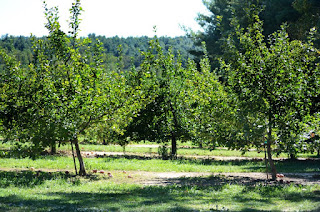 Stepp Orchards also has a wonderful common room in their barn, with a fireplace going to keep icy fingers warm, hot cider on tap, fresh apple juice, apple cake, and accessories such as apple peelers and corers available for purchase. I picked up a handy-dandy apple-corer and gorged on butterscotch apple cake while we all got assembled and directed to the proper picking places.

By the by, if you have an enthusiastic and bright child to bring along apple picking with you, I highly encourage it. Boy, can they pick like little devils! And run. And climb trees. And not carry heavy apple baskets, at all. 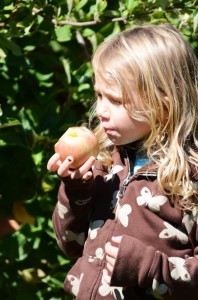 Calliope helps with the apples.

Once we were laden with big, gorgeous apples, we didn’t linger long at the orchard, because we had plans…oh yes, we had plans.  The bushel of apples, the gallon of apple juice, and a bag of fresh, clean sweet potatoes made it home with us in no time.

The rest of the day involved relaxing, for the most part, but I just couldn’t wait.  Within a couple of hours of being home, we were diving into a still-warm pan of German Apple Cake!

In the month since picking, we’re down to about 5 apples after we made everything…but we still haven’t made all that we wanted. We might just have to go again so we can have apple pie filling!

The complete list of what my housemate Sarah and I made from a bushel of apples:

Dried Apple Rings:  Soft and chewy, melt in your mouth, super-yummy apple rings!  And then the dehydrator started making the most TERRIBLE sound…time for a new one? Any suggestions from you food-preservation people out there?

German Apple Cake:  Nuh-uh. No way.  Not this recipe…if I tell you, I’ll have to kill you.

Apple Sauce: (which became Apple Butter)  Easy to do…chop apples, put in a pot with a small bit of water or apple juice.  Cook down with a lid until soft.  Strain if needed, and ta-da!  If you want to turn it into apple butter, transfer it to a crockpot and season the ever-loving sense out of it with brown sugar and cinnamon and cloves and such, and then let it cook on low until you like it.  SO EASY, and smells soooo goooooood. 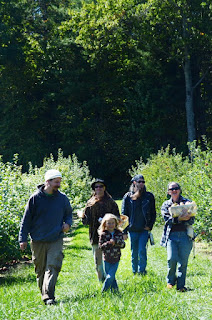 A happy apple crew, by MSP

Apple Pectin:  (Check out this recipe on Mother Earth News for reference) We did not succeed completely at this task…but we used up all the peels, cores, and otherwise unwanted bits of apples on hand in the attempt.  Our pectin didn’t clear or settle well because our apples were too sweet. Apparently, this works better with sour or crab apples, which I would have known had I read the entire recipe. Whoops!

Apple Cordial:  This is so fun and so easy.  I peel my apples by hand and leave flesh clinging to the peel.  I put the peels in a jar.  I put spices in the jar sometimes…other times, just apple-y goodness.  Then I fill the jar with vodka (or rum. or brandy.) and remember to shake it occasionally.  Once I’ve forgotten about it for a while, I strain out the peels, add sugar or sugar syrup to the alcohol, and bam! Apple cordial.

Apple Mead (Or Cyser):  A grand experiment has begun!  The jug o’ juice that we picked up from Stepp Orchards was wonderfully tasty, but we stopped drinking it when it was half-empty.

Next, I heated water and melted a large pour of honey into it to make a must (un-fermented mead) and poured it into the gallon jug, and added one single solitary allspice bud.

I popped an airlock on the jug and pitched the yeast the next morning.  We’ve got a perfect spot to keep the jug warm (between 80-84 degrees) and it’s been bubbling merrily for about a week.  It will soon be bottled (if we can save enough…we keep tasting it and it’s already dwindling rapidly).

Check out your local farm offerings for a U-Pick near you.  I used the Appalachian Sustainable Agriculture Project (ASAP) to find Stepp Orchards!