Chamomile is a common herb, often taken for stress and fatigue. It can help with more than that, excelling for both internal and external uses. 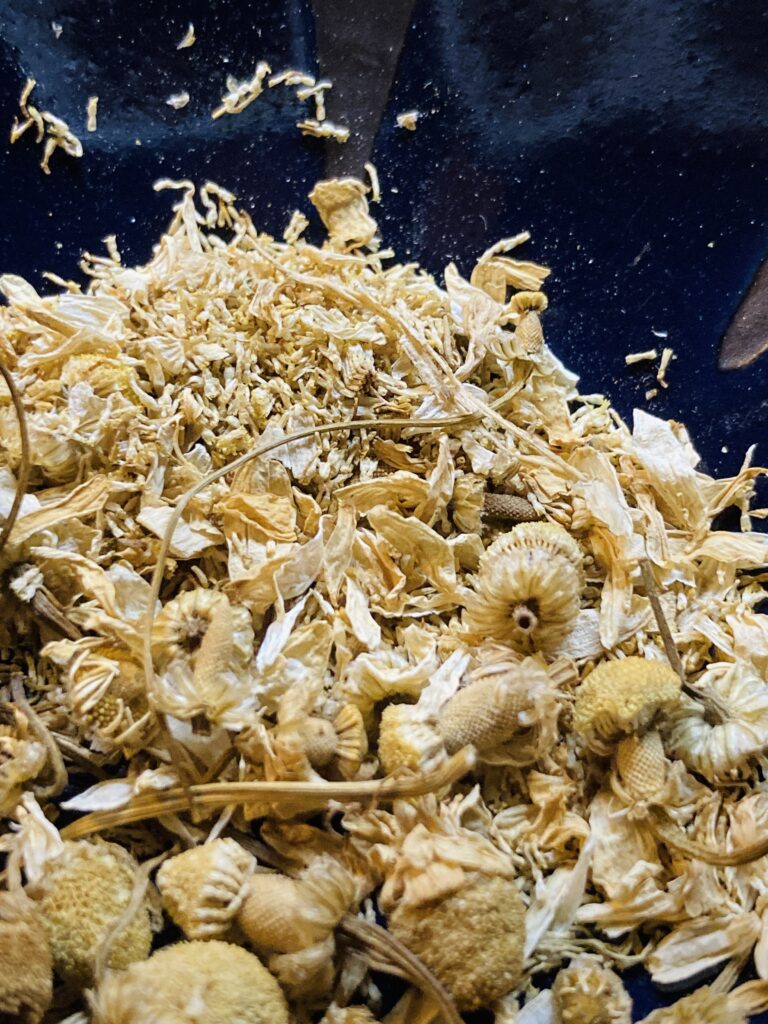 When I was a teenager, I was plagued by insomnia and migraines. I was in so much pain that I couldn’t communicate effectively. My grades dropped, I lost friends, and even became suicidal as I suffered from severe pain. As other people with chronic pain can attest, it is exhausting to endure such a consistent level of discomfort. Even though I was beyond tired, each night found me awake and staring at the ceiling of my room, miserable and unable to sleep.

That year, I won a holiday raffle at work and received a gift pack of assorted tea. I was unenthused, as I considered myself much more of a coffee fan instead of a tea drinker. The box of tea was tossed into a messy corner of my room and ignored for a week or so until it caught my eye at 2 AM as I lay in bed, miserable and desperate for rest.

As I leaned against the kitchen counter and waited for the water to warm up, I explored the assortment of tea bags. Raspberry or lemon seemed too fruity and sour. The caffeinated black teas were set aside for daytime enjoyment. The last few remaining tea bags had a funny name that I didn’t know – Chamomile.

I recall opening the tea bag and taking a whiff. The scent was vaguely floral with a hint of apples and something sweet. I poured the boiling water over it and inhaled the steam, enjoying the warmth and the feeling of relaxation already settling over me. We didn’t have honey, so I stirred in a spoonful of sugar and carried the warm mug in both hands back upstairs to my room.

Something silly played on the television to distract me as I slowly sipped the cooling tea. The chamomile was unlike anything I’d ever had before. By the time the cup was empty, my eyes were closing of their own accord and I was soon snuggled up in my bed and sleeping soundly for the first time in ages.

Flash forward to today: I am an herbalist with an apothecary full of roots, leaves, tinctures, powders, resins, and all kinds of plant magic from around the globe. But if you ask me what my favorite herbs are, chamomile is still one of my top three choices.

What is Chamomile Good For?

Chamomile (Matricaria chamomilla) is a part of the daisy(Asteraceae) family. It is sometimes known by the common name “ground apple,” or “kamai melon” in Greek, which is where its common name is derived. The Spanish name, manzanilla, means little apple. It is this fresh scent and medicinal properties that have made it a beloved and much-appreciated medicine by cultures all around the world for a very long time.

When making an infusion or a cup of tea using chamomile, use water that is very hot but not quite boiling to avoid burning off the delicate aromatics. You should also cover the cup or pot as it steeps so that the volatile oils don’t disappear with the steam.

A good ratio for tea is 1 tbsp of dried herb to 1 cup of water. Let it steep for at least 10 minutes. Sweeten with honey, or get decadent with a bit of milk for bedtime tea.

Not only was chamomile a gateway into my herbal path, but it was also one of my first successful gardening experiences. We had a small garden bed in our rental property and I scattered a whole packet of chamomile seeds into the soil. By summertime, the lush ferny greens and bright flowers were abundant! Each afternoon when I got home from work, I would go out to the garden bed and pick a handful of flowers to dry for tea. The bright scent of the fresh plant is unforgettable!

I’ll be trying to grow chamomile again this year, as I do every year. Our attempts so far have been a failure between the bunnies, the deer, the groundhogs, and our neighbor’s cats. Everyone loves chamomile, it seems!

If you want to give chamomile a spot in your garden, I suggest you buy chamomile seeds or live plants from Richters.