Nettles – a feast on the forest floor

Nettles may have a bad reputation as pain-causing weeds, but they are a fantastically healthy green and useful herb that shouldn't be ignored! 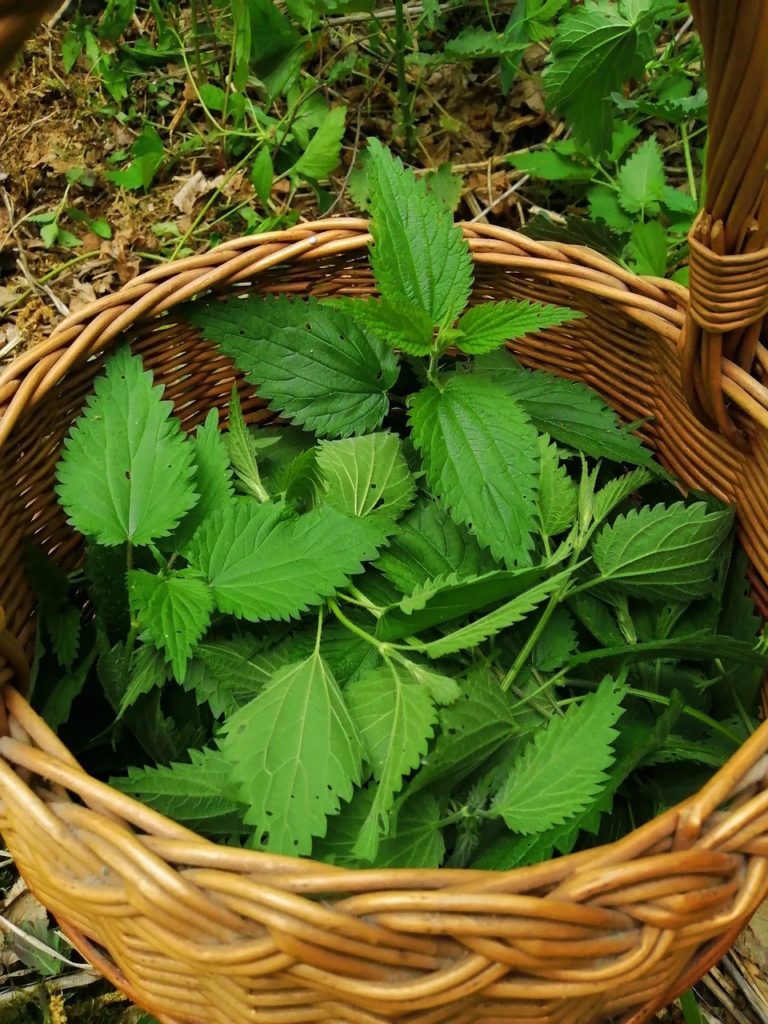 Stinging nettles are common around the world, throughout Europe, Asia, northern Africa, and western North America, and because of their many uses, has been introduced elsewhere. Nettles are food, fiber, and medicine, and they have been used that way for centuries!

In March 2017, I answered a Craigslist ad offering “as many nettles as you can cut or dig.” The kind person who showed me into her backyard wasn’t joking – we gazed upon a sea of vivid, green nettles that rolled down a hill through the back of her yard, into a small trickle of a creek, and up the bank the other side. Eric dug a few live plants for us to transplant at home while I filled a few bags with the healthy, young nettle leaves. You could hardly tell anything had been taken when we left with our bags full of herbal plunder.

We found a nice spot in the back of our yard in which to plant the young nettles. They were dramatic and wilted for a few days until their roots got hold of their new soil, and then they sprang back, clinging to life and thriving. I didn’t harvest any of the young plants all spring and summer long so that they could become established. I invited them to “take over” that wild patch where not much else grows, and it seems that they accepted the offer. In January of 2018, after the snows cleared, I found small nettle tops rising through the dark earth – more nettles than what we originally planted! They died back after a few hard freezes, they come back with the warmth.

Those who have met nettles by brushing up against them accidentally are probably not big fans of this common weed. The sting of Urtica dioica is something unmistakeable! If you do get “bitten” while hiking or harvesting nettles, try chewing up a plantain leaf or dock leaf and sticking that on where it burns. It helps to take the sting out faster.

Fresh nettles are more than worth the trouble of harvesting them! If you’re afraid of the sting, wear good gloves and use a pair of scissors to forage. Just approach the plants with respect and pay attention to your actions – this is one of the lessons that nettles have to give.

The sting of nettle is sometimes used as a cure. There are accounts both ancient and modern of people with inflammatory conditions using fresh nettles directly on their sore joints to reduce their pain. The nettle sting overrides the already-existing pain and gives temporary relief from the deeper aches in the body!

The stinging leaves and stems of nettle are benign once heated or dried.  You can use young nettle leaves anywhere you would use spinach, kale, or other leafy greens. I add it to my Wild Greens Pesto after a quick blanch to remove the sting. Pizza, quiche, pasta, bread, soups…nettle can be added to them all. It is a versatile and tasty green, and deserves more respect in the culinary world!

Dried nettles are pain-free, as the drying process removes the oils from the small stinging hairs. They are often taken as a tea, or added to soups and seasoning blends for the dark, green flavor and nutritive content.

To dry fresh nettles, trim the leaves from the stems with scissors. Lay them on a metal pan or drying screen and let them sit in a dry, dark place for a few days until they crisp up, or use a dehydrator on a very low setting for a few hours. They might still retain a bit of sting in them until they are fully dry.

Nettle-infused vinegar is a great method for using nettles. It works as a conditioning hair rinse that strengthens and gives shine to dark, curly hair, especially when combined with rosemary. It can also be used for food, too. Anywhere you’d use a splash of vinegar, use the nettles vinegar to add minerals and nutrients to your diet.

Nettle is something I add to tea blends for PMS, anemia, urinary tract infections, and sinus allergies. It gets added to my Fire Cider, as well.  I used nettle through my second and third trimesters for the nutritive content, the gentle lymphatic action, and because it helps with lactation.

This high iron content is what makes nettle ideally suited for people with challenges to their immune system and low energy. Nettle is appropriate to use during recovery from infection, but since bacteria need iron to spread, it is best to stay away from iron-rich food during active infection in the body.

As a diuretic, nettle is a handy herb for people who often struggle with urinary tract infections and kidney issues. It’s often combined with dandelion leaf, corn silk, parsley, or chickweed. Any herbal treatment for PMS or swollen ankles wouldn’t be complete without a dose of nettle.

A few things to keep in mind: Nettle should not be used for anyone on blood thinners. There appears to be controversy over its use during pregnancy as fresh nettles can cause uterine contractions. If you are concerned, wait until the second and third trimesters before adding nettle to your daily herbal infusion.

Here’s an interesting video that gives a clear, step-by-step guide to making fabric from nettles.

How to make Ginger Tea