I love cheese, and have long been wanting to make some in my own kitchen.  I suppose that I am preparing for the future days where I plan to wake up early in the morning, milk the goats that I don’t have yet, and spend the morning making fresh cheeses and yogurt…hmmm…sounds nice. So it… 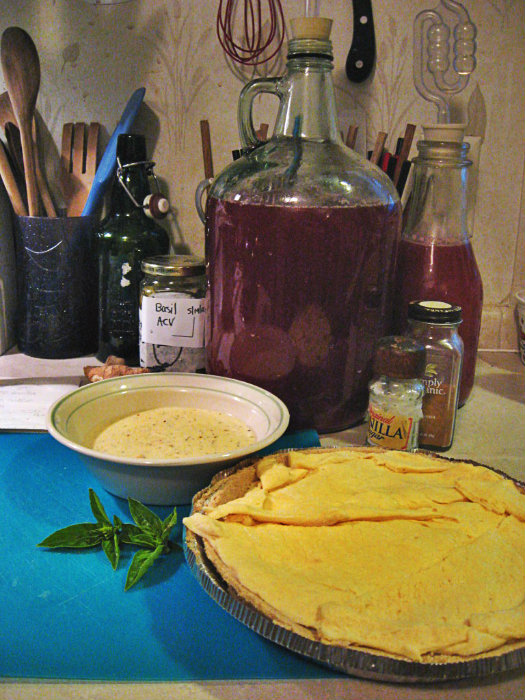 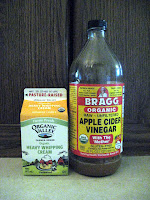 Do NOT use heavy cream
when making this cheese.

I love cheese, and have long been wanting to make some in my own kitchen.  I suppose that I am preparing for the future days where I plan to wake up early in the morning, milk the goats that I don’t have yet, and spend the morning making fresh cheeses and yogurt…hmmm…sounds nice.

So it makes sense to start with a very simple recipe when embarking on a new project, right?  After reading the book written by the ladies behind “Little House in the Suburbs,”  I decided to buckle down and try to make the basic “Vinegar Cheese.”

The basic concept behind the process is to heat milk just to boiling, add vinegar (or lemon juice) to encourage the curds and whey to separate, and then strain the solids for a few hours.  The end result is a bowl of whey to use in stocks or recipes, and a lump of white cheese that works like tofu or paneer in cooking.

I broke the cardinal rule of trying a recipe for the first time.  I substituted ingredients.

Instead of whole milk, I decided that heavy whipping cream would make even richer, sweeter, fatter cheese!  However, when I added the vinegar to the hot cream, it did NOTHING.  I added a splash more. NOTHING.  No curds, no separation.  Damn it all! 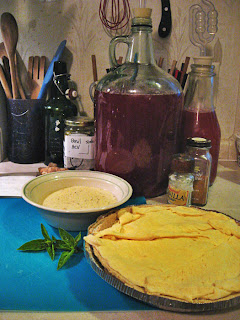 The internet had no advice for me, and letting the pot sit for a while didn’t work either.  *sigh*  I dipped my spoon into the lovely, thick cream and tasted it…and it had a great flavor!  Well…what could I do with a pot full of vinegar cream?

Opening myself to the possibilities to recover this mess into something edible, I dug through my available ingredients until I found something reasonable…frozen organic salmon, red potatoes, Old Bay seasoning…a-HA!

I thawed the salmon, set it to marinate in Old Bay and pale  beer, diced and boiled the taters, and then added it all to the soup and cooked it on low for hours.  At various times, I opened the lid, gave a sample, and then seasoned it to taste.

I cooked up some quick croissants to go along with the soup, and finished the dinner off with Eric’s birthday dessert, a cream cheese pie (modified the recipe to go into graham cracker crust with croissant top)!

Oh well….Eric loved the soup, the pie, and the wine, so I suppose that it was a win even if the cheese itself was a failure!

Don’t worry, I WILL try again.  Hopefully, next time, there will be cheese!

I got a choice.