Next time you make something with apples or pears, save your peels and cores to make your own batch of homemade vinegar out of fruit scraps! 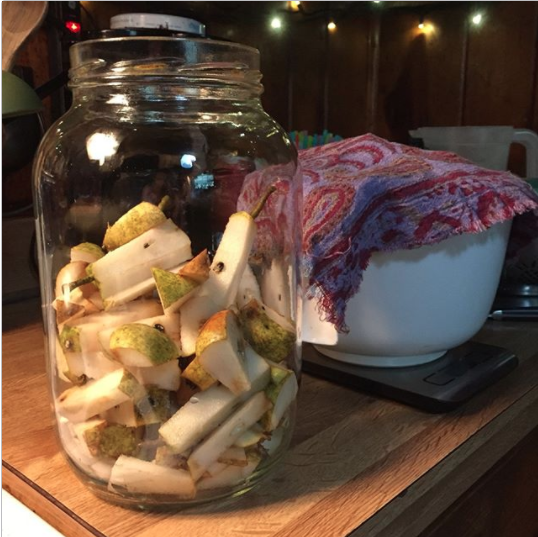 Last year I came into an abundance of pears from a dear friend with a few grand trees at the edge of her yard. Among our pear-related projects, I made a delightful pear cordial that you should check out!

After preparing the pears for the cordial-making process, I ended up with a big bowl full of pear cores, stem bits, and bruised chunks that I deemed unfit for inclusion in the cordial. Instead of dumping these into the compost, they became a vinegar! The flavor is bright and tart, and it livens up the palate. Best of all, it’s so easy to make!

To make fruit scrap vinegar, you need a few things: a fermented liquid and a “mother of vinegar” are the most important parts.

To get a batch of vinegar going, you’ll need some vinegar starter or vinegar mother. The vinegar mother is a colony of acetic acid bacteria that grows to cover the liquid and converts the ethanol to acetic acid. You can buy prepackaged packets or tubes of starter from a homesteading shop, but I just shake up some live vinegar and pour a little bit into my ferment to get it alive and growing. You can use something like Braggs ACV or from an older batch of your own home-made vinegar.

Put all of the scraps and peels into a well-cleaned jar or crock. I ended up with one huge pickle jar half full of pear bits. You can add sugar to help speed up the fermentation, but I do not find that step necessary to the overall process.

Pour the water over the pears.

Cover the jar or crock with a cloth and tie or rubber band it into place to keep out the dust and bugs. This cloth also allows it to breathe as it ferments and becomes boozy.

Set it aside on your counter or in a cabinet. You want to find a spot that is out of direct sunlight, but don’t forget about it! After a day or two, little bubbles will appear as the pear and water begin fermenting. Now we are ready to add the mother since she needs alcohol to do her magic.

Strain out the pears and solids and return the liquid to a clean, wide-mouthed jar or crock.

Add the mother of vinegar. For this recipe I grabbed my bottle of Braggs Apple Cider Vinegar, shook it up to mix it, and then poured in a glug (probably about 2 tbsp worth). Since apples and pears are so similar, the apple cider vinegar mother worked well. If you want to make a more specific vinegar – malt vinegar or wine vinegar, for example – you’ll want to find a mother specific to that type.

Recover the jar or crock with the cloth and rubber band, because the fruit flies are going to be SO EXCITED about your new project.

After a day or so, you’ll notice some white, ghostly oil slicks appear on the surface of the liquid. It will continue to grow until you have a healthy mother of vinegar. The vinegar mother looks like a white, translucent, rubbery plug on the top of the ferment. If you’ve ever made kombucha, you’ll recognize a vinegar mother right away.

This video shows you my very first batch. One correction: the mother is made up of cellulose and acetic acid – not yeasts like I mistakenly narrate in the video.

After a month, strain the vinegar into a large bowl with a spout, and then from there into sanitized bottles. Label the bottles and store them away for later use – the longer the vinegar ages, the better it tastes.

My project resulted in happy, bright yellow bottles of vinegar, and each has their own little skin of mother at the top of the bottle. Nice! It has a clear taste that is like apple cider vinegar, only with a bit of pear flavor. It will do fine for fire cider, hair rinses, salad dressings, and most of the other purposes to which I employ vinegar!

If you want, you can leave the mother and enough liquid to cover her in the jar so that she could be kept and used again. For a while, my vinegar mother lived on my counter with a cloth over her lid. Whenever I had a bit of homebrewed wine or live fermented liquid to share with her, I did, and it kept her going.

Soon after, I acquired a half bushel of apples and restarted the experiment using those peels and cores. I started another jar with papaya and pineapple skins. They were all going well until we went out of town for a few days. In our absence, we had a mouse move in and my mother jar and vinegars were destroyed by the mouse crawling over the cloth-covered jars. My cat has some explaining to do…

Resources & references for my process: