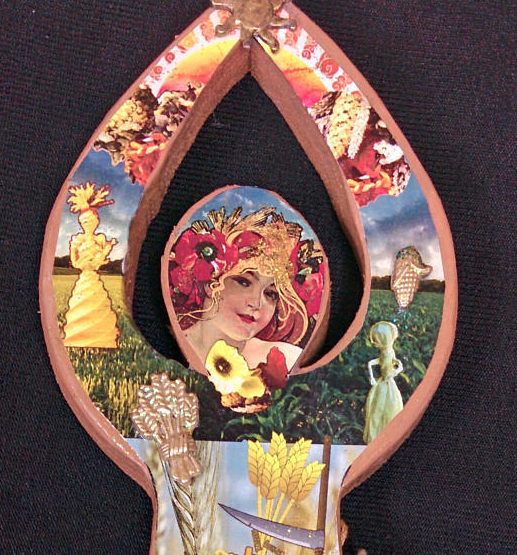 We can be both, you know. Mythology and stories are how we remember people and the things they did long ago. We have far-reaching memories because of the passing down of tales. Tailtiu lived and died in time round about what we call 2,000 BC.

Some say that Tailtiu was the daughter of Mag Mor, a king from what we now call Spain and wife of the last Fir Bolg High King of Ireland – Eochaid mac Eirc. Others say that “Mag Mor” is a metaphor for the Lord of the Plains (some say the land of Death), and his daughter Tailtiu is a face of the primal Goddess of the Earth and agriculture.

Stories are a multifaceted treasure…just hold it up to the light and turn the jewel to see the faces shift and sparkle from within.

Tailtiu lost her husband in battle during the invasion of the Tuatha De Danann but she survived and was allowed to keep her holding. She was given a child to foster as a sign of trust by the victors – a young boy who was born of Tuatha Dé Dannan and Formorian parents. Her foster son, Lugh, later earned the names Lugh Lamfadha, Lugh Longarm, Samildanach, master of all arts, and went on to be High King of all Ireland.

The jewel sparkles. There are yet more facets of truth and tale.

In some stories, Tailtiu remarried a man of the Tuatha Dé Dannan. In other tales, she remains single, and in yet others, she shares the fosterage of Lugh with Manannan Mac Lir.

What is most consistent among the stories is that at a certain point Tailtiu declared that a great portion of the forest should be cleared to create arable land, that she died during the course of that work, and that she asked for a gathering and funeral games to be held in her honor upon her death.

The accounts also all agree that Tailtiu fostered Lugh well and that she loved him as her own child. He loved his foster mother in return, and when she lay dying after the fields were cleared, Lugh declared the start of the festival Aenach Tailteann, the Tailteann Games at the beginning of August.

The funereal festival was a celebration of the memory of his foster mother but it also became much more. The harvest holiday became a place where laws were declared, handfastings were held, and sporting contests and storytelling were celebrated for two weeks. These games predate the Greek Olympics by over 1,000 years but ended under Norman conquest in 1,100 AD. The games lived again for a while in the early 1900s and all else we know of this event survives today in the festival known as Lughnasadh.

When I first learned of Tailtiu years ago, her name was given to me as a warning. The tale that I was told was that she got into a snit and cleared the plains herself since no one else would do the work that must be done. Strenuous labor was the cause of her death, plowing herself into the furrowed earth in a motherly martyrdom. That naming struck me deeply, as I had not learned to say “no” to requests for my time and energy, nor how to temper my emotional response to those in need. I would give and give and give…

Whether she was originally a human woman or a daughter of the divine, Tailtiu and the first harvest are intertwined now.

I’ll be making some crabapple mead for Tailtiu this weekend at Harvest Homecoming, and telling her stories so that she is not forgotten, or fully eclipsed by Lugh, although she might not mind.

Stories and memory are powerful. They make people endure long past their return to dust and dirt. Please, remember. Collect your harvests, sharpen your skills, and tell the stories of those who you love and would not have forgotten. Turn the jewels and make them sparkle in the light.

We who live, remember.

The Tailteann Games of Ancient Ireland: Their Origin, Growth and Continuity through Centuries of Unwritten History by Peggy Stanaland Eastern Kentucky University: http://library.la84.org/SportsLibrary/NASSH_Proceedings/NP1977/NP1977g.pdf

HISTORY & LEGEND ABOUT THE TAILTIU & THE TAILTEANN GAMES (A SNIPPET):
http://www.meath.ie/Tourism/MeathsTownandVillages/Teltown/

Saint Gobnait – She of the Bees